The Thorn Healer by Pepper Basham

​surprising bond drawing him toward the independent and beautiful woman. Displaced by a war and a painful history, he finds Hot Springs and the intriguing Jessica Ross a tempting place to start over. Determined to scale the heights of her bitterness and show her the power of love, August faces more than just Jessica's resistance but a more devious design to harm the civilian sailors housed in Hot Springs.
Will August's tender pursuit bring Jessica the healing and hope she needs, or will bitterness force her into the hands of a "true" enemy waiting to destroy much more than her heart?

I loved this story! I didn't want to leave them!!!


Pepper has penned another amazing story to which I will have to go back and reread the other 2.
I love her writing style. She has definitely opened my eyes to the many blessings that God bestows upon us every day. Sometimes we are too blind to see them.
There are some favorite sayings of mine throughout the entire book. One of my favorite is I can do all things through Christ which strengthens me.
To be reminded of this brings me great joy. I know He is there every day waiting for us to come to Him.
Jessica Rossi has a lot to learn and one is that. She has a lot of hurt from the war to health from. She's also most certainly stubborn and refuses to believe that God does love her and He has never left her.
It takes one very special man and family to help her uncover what she has lost. I love August. He's proof of God's unjust love and forgiveness. He's always has a ready smile for everyone and anyone. He has a great outlook for everything because he has Jesus in his heart.
He's kind and witty and a solid rock and my oh my he's has the good looks oh my !!!!!
I'm glad the author has brought David and Catherine back in for Catherine does give Jessica some sound advice on love and plus an evil no gooder who is prejudice against certain ppl.
I love this story because it also has given me a new family to love and cherish.
I like how the Carter family helps those in need and reaches out to share their love.
Grandpa Carter is full of wisdom and love. Just like my own Grandpa was. (My how do I miss him but I will see him again someday)
Granny was pretty special to me too!! She had some sound advice as well. I think it is amazing what our older generations have lived through and the stories they can tell!!!
I really hate to say goodbye to these ppl.
It makes me want to cry!
I did laugh in some places. Pepper does put humor in all the right places where it's needed!
I loved the setting in which the story takes place. Ww1 has many heartaches and sometimes there is joy if we only look in the right place.
The Lord has reasons for what He does.

Pepper Basham is an award-winning author who writes romance peppered with grace and humor. She currently resides in the lovely mountains of Asheville, NC where she is the mom of 5 great kids, speech-pathologist to about fifty more, lover of chocolate, jazz, and Jesus. Her debut historical novel, The Thorn Bearer, released in May 2015 and has garnered awards such as Reader's Favorites Award, finalist in the Grace Awards, shortlisted for the Inspy Awards, and a finalist in ACFW’s Carol Awards. Her second historical novel, The Thorn Keeper, released in Feb 2016 and her first contemporary romance, A Twist of Faith, released in April 2016 with a 4 star review from Romantic Times. You can get to know Pepper on her website, Facebook, Instagram, or over at her group blog, The Writer's Alley. 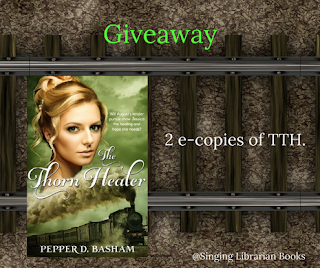 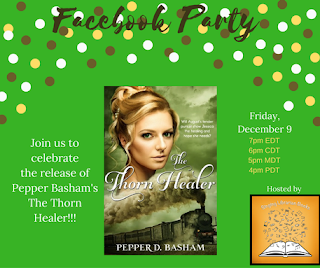 Bad Day for A Bombshell by Cindy Vincent

December 5th, 1941. Houston socialite, Tracy Truworth, is always on the lookout for something suspicious. Especially after growing up with her nose in the latest Katie McClue mystery novel, a series featuring a twenty-something female detective and her constant feats of derring-do. And for Tracy, escaping reality through reading couldn't come at a better time, since her own life isn't exactly going along like she'd hoped. Not with her overbearing mother determined to see Tracy marry Michael -- a lawyer likely to be a U.S. Senator someday -- in a wedding rivaling royalty. Yet everything changes for Tracy when she spots a bleach-blonde bombshell on the train home from Dallas after a shopping trip to Neiman-Marcus. Because something certainly seems amiss with the blonde, given the way she covertly tries to snare men into her lair, and considering the way she suddenly ceases all flirtations when a Humphrey Bogart look-alike appears . . . complete with a mysterious package wrapped up in newspaper and twine.

Then days later, Japan bombs Pearl Harbor, and just a few days after that, Germany declares war against the U.S. Rightly so, President Roosevelt returns the favor. Of course, Tracy immediately finds herself caught up in the War, just like the rest of the nation. But it's her curiosity that leads her on a collision course with a killer, and she arrives at the bombshell's apartment only moments after the blonde has been murdered. Though Tracy is accused of the crime at first, she quickly finds herself working as an Apprentice P.I., under the tutelage of a real private investigator. Soon, they're hot on the trail of the bombshell's murderer. Then from singing at the hottest nightclub around, to a car chase in her 1940 Packard, Tracy's investigation takes her far from her blue-blood upbringing. And it isn't long before she finds the War is hitting a lot closer to home than she ever imagined . . . and danger isn't much farther than her doorstep

What a fun and interesting read! certainly different from what I'm used to reading.


I like Tracy Truworth. She's an interesting character. She loves adventure and it always seems to find her!!!
I love her personality. She can make friends and enemies no matter where she goes! Mostly makes friends and unexpectedly finds one when she needs it most!!
I kind of thought Michael didn't measure up. He's always making excuses as to why he couldn't see Tracy. I don't blame Tracy for what she did or in this case both did. It was her mother that wanted the marriage. Her mother is a high socialite. In so very many ways, Tracy felt like she never measures in her mother's opinions. in other words, her mother isn't very nice. I thought she was kind of mean and selfish. She wasn't interested in Tracys well being only herself.
The blonde bombshell turns out to be nothing but trouble with a capital T! Shame on her but no one deserves what she got.
Let's just say that you reap what you sew.
I laughed until I cried in some places as Tracy tried to find her way out of some messes lol! wrong place at the wrong time!! However; some good did come out of it. She landed her first paying job.
I guess it came from reading all those Katie McClure mysteries. After all, Katie Mcclue was Tracys heroine.
I enjoyed this book because it had some ups and downs of our everyday life and the author has managed to bring them to life quite explicitly!
I also love her writing style!!! She brings humor in just all the right places. I also like how she put a some mystery in the story to keep it interesting.
I definitely was kept on the edge of my seat.
This happens to me quite often.
I enjoyed the backdrop of the story. I felt like I was there when Pearl Harbor got bombed. It is what drew America into the 2nd ww. (My grandfather served in that war)
I cried when that happened.
I liked Sammy immediately. I knew he wasn't a dangerous man. I thought he was interesting and a pretty special guy.

Cindy Vincent, M.A. Ed., is the award-winning author of the Buckley and Bogey Cat Detective Capers, a mystery series for kids and cat-lovers that features the adventures of two black cat detectives.  And yes, as she is often asked, Cindy used her own black cats, Buckley and Bogey, as the inspiration for the series, since they seem to run surveillance on her house each and every night.  Cindy is also the creator of the Mysteries by Vincent murder mystery party games and the Daisy Diamond Detective Series games for girls, along with the Daisy Diamond Detective novels, which are a spin-off from the games.  She lives in Houston, TX with her husband and an assortment of fantastic felines.  Cindy is a self-professed “Christmas-a-holic,” and usually starts planning and preparing in March for her ever-expanding, “extreme” Christmas lights display every year . . . She is also looking forward to the release of the first book in her new Tracy Truworth, Apprentice P.I., 1940s Homefront Mystery series,  which is due out in the Fall of 2016.  ​
​GOODREADS | FACEBOOK | PINTEREST | AMAZON | BLOG | WEBSITE