As a victim’s advocate, Grace James is used to rushing into trouble to save her victims from abuse or assault. And with a handsome officer like Joe Hart at her side, Grace is sure there’s nothing she can’t do. But an ominous storm brewing on the Oregon horizon is about to change everything—and bring with it dangers and revelations Grace and Joe never expected.
GOODREADS | AMAZON

The book was ok except for the switching of characters back and forth. It made it a little hard to read.


It was also a hard read because of the topic of the book but here again the author has done a wonderful job in writing this.


It's truly an emotional book and especially when children are involved it really makes me want to kick the man's pants and give him a taste of his own medicine!!! It's NOT ok to abuse people of any sort because they are different or maybe women. Each one of us has feelings. I don't much care for the excuses that some make to cover up wrong.
It's why I admired Grace who loves helping people that need it.
This wasn't my cup of tea but there are people who do like to read this.
I still recommend this book.
I received this book for free. This is my honest opinion and compensations are not required

Shannon Symonds worked for 15 years as an Advocate. Shannon lives in a small seaside town where she works, writes, runs and paints. She believes the word can be changed one heart at a time and then even small acts can make a difference.
GOODREADS |FACEBOOK | TWITTER | INSTAGRAM | LINKEDIN| WEBSITE

(Insert interview here or include the one below.)
1. Whom or what inspired you to become an author?
I totally blame all the teachers in my family for encouraging me. When I probably only deserved 1 gold star, they always gave me 5.
The teachers, who were my grandmother and great aunts, read to me and listened to what I wrote.  I remember being very young and reading Ozma of Oz at our family beach house on a rainy day. I felt absolute anguish when the book ended. I decided to carry the stories on. Every night at bedtime I spent hours making up stories, which I still do when sleep escapes me.
I wrote my first stories and poems in elementary school. I read everything to the family teachers,  my grandmother and great aunts. I would mail them poems, and as they were teachers, they would return them to me with red pencil corrections. I loved it!
When I was 12, our young women’s leader had us write down a list of long term goals. Publishing a book was on my list. I never forgot my list or goals, even when I set them aside to change diapers and cheer for 6 little people for several years. The only thing left on my list is hang gliding.
2. What did you want to be when you grew up? Did becoming an author ever cross your mind?
Becoming an author seemed like an unattainable dream. More than once I heard I would starve. Life and my need to support my family consumed me. My children grew, time passed and one day, the money didn’t matter to me anymore, nothing mattered. It just had to be. It was finally the right time to take a leap of faith and put my dream into words.
3. When you are not writing, what other “hats” do you wear?
When I am not writing, I am spending time with family and friends doing anything outdoors like walking the beach, crabbing or kayaking.I can’t go without running at least 3 miles a day, going to church, and if I am very lucky reading!.
My day job is as  a manager in a national nonprofit organization.  I  still work a few nights a week as a domestic and sexual assault advocate answering the crisis line and responding alongside law enforcement.
In addition, I love volunteering. I currently volunteer at church as the compassionate service leader. I am donating a portion of the proceeds from Safe House to Operation Underground Railroad (O.U.R.). It is an organization dedicated to ending sex trafficking and providing aftercare to survivors. I write for their volunteer newsletter and am working with a group on a small awareness event.
4. What inspired the idea for Safe House?
I am very passionate about the need to support survivors and create awareness. I honestly spent some spiritual time struggling and wondering how I could bring more  awareness to the issue of abuse from my small town world. Safe House was my answer.
Statistics or news stories can’t tell you what it feels like to listen to a 12-year-old boy worry about a parent who has just gone to jail, or what it feels like to listen to that same boy feeling guilty because they failed to protect their mother during an assault. I had to write Safe House, like I will write other stories of hope and healing, like I need to breathe.
I want the world to know the true story about what is going on right next door. I want survivors to know they aren’t alone. Others have experienced the same feelings and thoughts as they have. There is hope and safety for survivors, and the world cares.
5. What do you want readers to take away from Safe House?
I want readers to be swept away in a Pacific storm, hope for love, cheer for the good guys and possibly gain insight into the guys who make bad choices. I want them to be so involved in the story, they don’t even realize they are experiencing something entirely new. They are seeing the world through an advocates and survivors eyes on the treacherous road to hope.
6. What is your current WIP?  What can you tell us about this project?
Currently I have an outline for another story involving some of the same characters, but in a stand alone novel.
I am donating a portion of the proceeds from Safe House to Operation Underground Railroad to help end sex trafficking and provide aftercare to survivors. I am also volunteering some of my time to the cause. I have seen this very issue in my own small tourist town. I plan to write a story that explores some of the challenges….well you will just have to wait and see what they are!

Writing and publishing are two very different things. Writing is personal, internal, and creative. Publishing is public and to me, just a little scary. It’s like having your new mother-in-law over and giving her a tour of your soul. Safe House was written in the dark lonely winter months in my 100-year-old beach shack by the fire. Most of the time I was totally alone and even though Cedar Fort has published it, there are still many untold secrets I plan to share with you today.

Let’s start with number 5. I promise I will let you know if there is a spoiler alert.

I stopped counting the number of calls I had been on with law enforcement when I went past 500 domestic and sexual assault responses. After spending thousands of hours listening to survivors and running support groups, a few common themes or stories emerged. Kelly and Amber’s experiences in Safe House are patterned after those common themes.

Safe House or fiction was the only way I could find to take a reader to the heart of the experience or share what I felt. I believe stories are much more powerful than statistics.

After thinking long and hard I came to this conclusion. As an Advocate, I have been asked countless times how I do the work I do, including working with people who are murdered, physical and sexual assault victims, and children who are injured. The answer is I cope by writing, running, my passion for the work, but most of all I cope by turning to my faith.

I love my faith’s quirky culture. I have seriously warm feelings for things like trek, emotional young women, relief society, and even girls camp. Church can be spiritual one minute and because we are all human, comical the next.

I like reading books like Dan Brown’s, “The Da Vinci Code.” One of my all-time favorite movies is, Joseph Stein’s “The Fiddler on the Roof.”  These stories wouldn’t exist without religion.

I am not the best member of my church or the worst. The book isn’t about church; it is about people who go to church and people who don’t.  I wouldn’t be the advocate I am without my faith. It is the way I cope and so it helps Grace cope in Safe House.

One night we woke to NOAA Tsunami Alarm going off. We took our little SUV and rode through downed trees, flooding water, and unbelievable wind sustained at over 100 mph to our adult son’s home. His house was out of the Tsunami Zone.

The winds continued for more than a day and were measured at over 137 mph. Water spouted up more than 10 feet blowing sewer lids into the air. I watched a metal pole barn implode and sheet metal cut tree limbs like a razor and paper. Tall metal power poles were crumpled like tin foil.

There was no Tsunami, but there was also no cell service, no power, no heat, no television, and both roads out of the area were flooded and covered with piles of downed trees. We were cut off from the outside world and would eventually be without power for 5 days.

Thankfully, we were prepared. We ended up with a ton of teenagers and a 70-year-old ward member sleeping at our house. It became a party and a good memory. Our little town and ward really pulled together.

Guest Post 2: Top Ten Vacation Locations (If money and time were no object)

Judy Collins would be on the record player, chocolate chip cookies would be baking in the oven, All the doors and windows would be open, and my 12 cousins, would be building a fort in the sand dunes or learning to swim with my dad and Uncle Joel. Sandy kids would be laughing and running everywhere. When the sun begins to set, a bonfire would be lit and we kids would stay on the beach with Uncle Joel, knowing the women of Lassie Hame were watching from their rockers at the house. I would feel safe. All would be well in my world again, for just a moment in time.

A Love So True by Deborah Raney

On Tour with Prism Book Tours A Love So True (The Billionaires of Sawgrass #3) By Delaney Cameron Contemporary Romance ebook, 200 ... 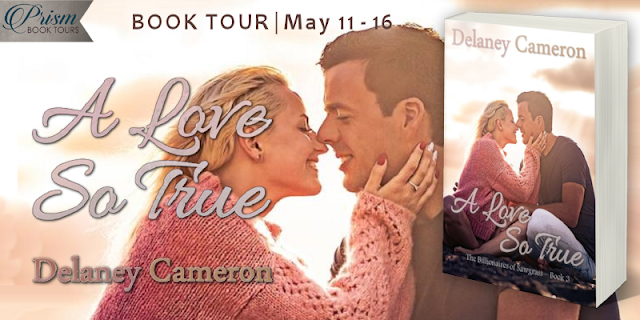