Eternity between us by Stephenia H. McGee 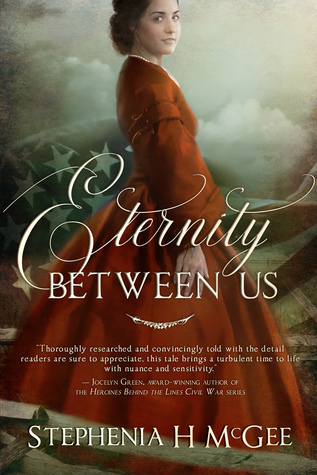 Two sides. Two hearts. And a gulf between them as deep and wide as eternity.

"This tale brings a turbulent time to life with nuance and sensitivity."
JOCELYN GREEN, award-winning author of the Heroines Behind the Lines Civil War series

Virginia, 1861
After being forced to use a pistol against invaders, Evelyn Mapleton is no longer the timid girl her extended family expects. The more her aunt and cousin resent her new independence, the more Evelyn is determined she'll make her missing father proud by taking up his cause and aiding Confederate soldiers--even if she has to outmaneuver the Yankees guarding her home to do it.

Samuel Flynn's life is consumed with two priorities: learning to become a proper guardian for the young orphans he's adopted and obtaining his physicians license. When his final testing sends him to a Federal Army field hospital, the last thing he expects is to be entranced by a mysterious woman. But when Evelyn's misguided exploits put her life in danger, will he risk everything he's worked for to save a woman he thinks is his enemy?

Based on first-hand accounts from the Civil War and with a strong romantic thread, this is a tale of faith, espionage, hope, and courage historical fiction fans won't want to miss.

I enjoyed this book as I love historical fiction.
Stephenia has a way of writing that makes you a part of the story.
It is fast paced and you won't want to put the book down until you finish. I spent most of the night finishing because I didn't want to come back.
I loved the characters. Stephenia has a way of making them come alive and I think I'm going to have to go with Evelyn. Evelyn is a special character in herself. I think because in some ways she's a lot like me. I also admired her because she knew how to stick up for herself. Even though I didn't like the way she was treated I thought that all she went through made her a better person. People can't help their lineage. I think it's a shame we all can't get along. God made us equal in His eyes. I don't even know how hate really got started except through Satan. He's the root of all evil!! Just between you and me I thought Evelyn was pretty and down to earth. She wasn't stuck up like other people. What makes people like that? I have no idea. But I'm pretty sure God does.
Now I like Stephen the doctor. He knew what he was about and like all human beings he had a certain weakness but he went on about his duties as was expected during that era. I considered him a hero.
You won't want to miss this wonderful novel. I highly recommend this story for all who love the Civil War era or just historical fiction. I want to read all of her other novels. I"m hooked!!
All opinions are my own and no compensations were received.

Stephenia H. McGee is a wife, mother of two very active little boys, author, and lover of history. She currently lives in Mississippi with her husband and sons where she writes stories of faith, redemption and the deep south.