Review for Seasons in Paradise by Barbara Camaron 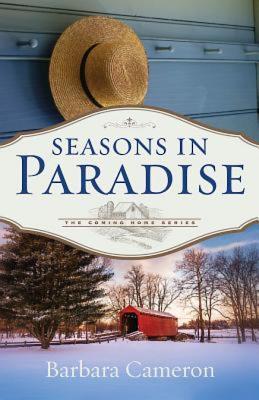 Sam Stoltzfus left the Amish community and followed his older brother, David, into the Englisch world, walking away from a chance for love. Sam had clashed with his father, but is there more to his leaving the community than what he says? Mary Elizabeth, the woman he was starting to love before he left, is determined to find out the reason and bring him back into the fold in time for Christmas.

Oh my! I finished this book today. All in one day! That's how good it was!
God is good is he not?
Just when Mary Elizabeth lost hope in ever getting married God helps her along the way.
Mary Elizabeth is a pretty cool Amish woman. I loved how she bounces back after having her hopes up about marrying Sam.
Mary Elizabeth is a woman of many talents from cooking, sewing, whatever the case may be.
I just knew it was wrong when she was dating Ben because she was trying to show Sam up but I also knew she was using Ben as a rebound which isn't good either!
Aren't men just so hardheaded? Sam just goes to prove it by running away from home with his 2 brothers. Their father wasn't good to them but maybe it had something to do with the way he was raised? Some parents doesn't know how to show their affection especially men. From what I hear, it is more difficult for them to show their feelings which I think is a lot of malarkey. They're human too.
Sams mother mentions that it took Lavina to marry David to get him to come home. She also mentions it about Sam. It took someone to tell her that it was God's will that Sam might come home? Who knows? Only God does!
I am so so happy for Lavina! She's a wonderful inspiration as well.
Isn't there a pattern here? I think the Stolzfus's mirror the Zooks. I believe each of their children were meant for each other but sometimes it just takes a little nudge from God to help show us the way and that is why I love this story. This is why I gave 5 stars to this wonderful book
Barbara is an excellent storyteller!

BD, CBA, and ECPA bestselling author of 24 books (including new series upcoming for Abingdon Press in 2011/2012) including fiction and non-fiction books for Abingdon Press, Thomas Nelson, Harlequin, and other publishers.I sold three films to HBO/Cinemax and am the first winner of the Romance Writers of America Golden Heart Award.My two novellas won the 2nd and 3rd place in the Inspirational Readers Choice Contest from the Faith, Love, and Hope chapter of RWA. Both were finalists for the novella category of the Carol Award of the American Christian Writers Award (ACFW).