ECHOES AMONG THE STONES BY JAIME JO WRIGHT 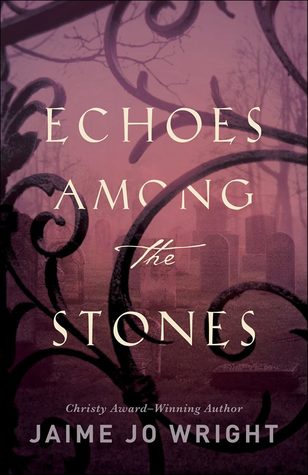 Echoes Among the Stones

Jaime Jo Wright (Goodreads Author)
4.27  ·   Rating details ·  33 ratings  ·  24 reviews
After Aggie Dunkirk's career is unceremoniously ended by her own mistakes, she finds herself traveling to Wisconsin, where her grandmother, Mumsie, lives alone in her vintage, though very outdated, home. Aggie didn't plan for how eccentric Mumsie has become, obsessing over an old, unsolved crime scene--even going so far as to re-create it in a dollhouse.

Mystery seems to follow Aggie when she finds work as a secretary helping to restore the flooded historical part of the town's cemetery. Forced to work with a puzzling yet attractive archaeologist, she exhumes the past's secrets and unwittingly uncovers a crime that some will go to any length to keep hidden--even if that means silencing Aggie.

In 1946, Imogene Grayson works in a beauty salon but has her sights set on Hollywood. But coming home to discover her younger sister's body in the attic changes everything. Unfamiliar with the burgeoning world of forensic science and, as a woman, not particularly welcomed into the investigation, Imogene is nonetheless determined to stay involved. As her sister's case grows cold, Imogene vows to find justice . . . no matter the cost.

I think that this is the best book by Jamie Jo Wright ever!! Just wow!


Told by Imogene of the past and Aggie of the future. Almost had me confused but towards the end I began to figure it out! Just wowsers!!
Best story plot and wonderful characters that will keep you guessing until you can't believe who it is!
I really think the best part (well, maybe not best but still.....) was when Imogene's parents passed away within days of each other. I say this because it was a coincidence that my grandparents did too. We had moved to Kentucky then and had to turn around and come back for grandpa's funeral. I guess that's what makes two people into one soul. I guess that's how you say it.
I finished this book at 2 a.m. in the morning because I wanted to see what happened next! Jamie didn't disappoint me! Not at all! I was hung onto every word of this mixture of weird but wonderful story!
Here's a quote I like and this is from Collin " Grief isn't wrong, but it can paralyze. It can thwart a life. A person can choose to let time stand still, and while they hold the pieces of the past, the hope of their future passes them by."
So so true.
And another one " A person shouldn't miss the promise of whatever is in store. Grief is like the moment you close a chapter in a really good book. It leaves you suspended , unfinished, even remarkably unsatisfied". In other words the story isn't over in a person's life. You should learn to go on. But even at times that isn't easy.
Do you ever hear your loved one's voice? Sometimes guiding you along the way with the Lord's help of course.
Yes, I do talk to my mom and the weird part about it, I can still see her there standing there shaking my head at some of the things I do, say and even some of the friends that I "supposedly" pick.
She'd say " Lori you've got a doozy of a friend this time don't you"? I'm like, " I don't pick them, they pick me:"!
Here's my most favorite saying of all from Mumsie, "Ohhh Agnes. Regardless of where faith may take us and what the good Lord has in store, we'll never stop hearing their voices. The voices of the ones we've loved before.
I'm so glad that we don't have to stop. I think that in some ways the Lord still lets us "hear and talk" to them because they are our guardian angles. Heaven knows we need divine help from time to time.
I normally don't put quotes from the book but this time I felt the Lord giving me a little nudge in the back to do so. I'm guessing He needed for someone to read my review and know that there is Hope, forgiveness and love along the way to help them.
I nearly cried writing this review because it was a sweet reminder that He's still there even when at times when we think He's not. Believe me, He is more than you know!
I just can't get over this wonderful story! I really enjoyed it and I'm even going to ask my husband to buy the paperback when it comes out!! Cause this is a KEEPER!! for sure!
I strongly recommend this to readers of all ages! My hope is that you will be blessed as I was.
My thanks to Netgalley. NO compensations were received and all opinions are my own.

Daphne du Maurier and Christy Award-Winning author, Jaime Jo Wright resides in the hills of Wisconsin writing suspenseful, mysteries stained with history's secrets. Jaime lives in dreamland, exists in reality, and invites you to join her adventures at jaimewrightbooks.com!
- November 19, 2019