As the Light Fades by Catherine West 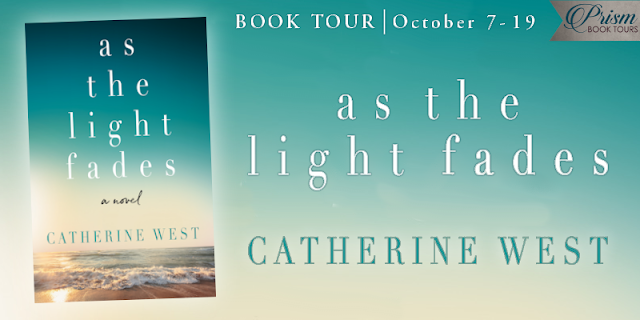 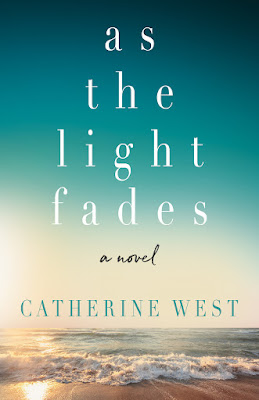 Sometimes we’re placed in the strangest of circumstances for the most important reasons.

After her carefully constructed life crumbles, Liz Carlisle finds herself back on Nantucket, picking up the pieces. With the family estate under renovations, the solitude she craves seems out of reach.

Matthew Stone intends to steer clear of his new tenant. She’s carrying a load of baggage, but as long as she pays the rent, he’ll let her be. He’s got enough to deal with caring for his wayward niece, Mia.

Liz doesn’t have time for teenagers and her track record with men is abysmal, but an unlikely friendship forms between the three.

When her former boyfriend is charged with assault, Liz is called to testify against him. But he knows the darkest secrets of her life—secrets she’d hoped to keep buried forever, and he’s ready to reveal them. Telling the truth is the right thing to do, but it may cost her everything she’s worked so hard for, and all she’s come to love.


Excerpt from as the Light Fades


The man staring back at me looks old. I painted his portrait once, which he wasn't very happy with.
His hair was a deep brown; raw umber, I'd call it. Used that color a lot back in the day.
Streaks of gray look out of place, like they're trying too hard to fit where they don't belong.
And the part is combed on the wrong side.
Though my memory is fading, wrinkles I know weren't there before give new character
and tell a thousand tales of a life well lived.
Leathery skin pulls this way and that as he grimaces, equally perplexed by this new situation we find
ourselves in. This place we're supposed to call home isn't. A long rectangular building that smells
like a hospital on a good day and a sewer on a bad is filled with strangers who seem to know as
little about themselves as we do. We;re given barely edible food; watery eggs for breakfast, soup
and sandwiches for lunch, and whatever mush they decide to throw together for dinner. Board
games or cards for the ones who can still think over the endless blather of the television. Some
just sit where they're put, suffering through endless days of doing nothing. Mindless routine for
the mindless.
I suppose our surroundings are comfortable enough. I have my own room and a few things I still know
are mine, like books, and photographs on the wall, but I've never liked change and I"m not about
to embrace it now.
"You have no choice, old man. His gravelly voice startles me. But he's right. I stare back at
him and nod. Names come and go with increased frequency these days. I try to recall his before it
slips away. But I don't need to remember it. It's the eyes that give it away.
Eyes the color of dark toffee, flecked with gold, a hint of green on a good day. Eyes that have
seen the passage of time, held laughter and tears, watched over loved ones, and reluctantly
let them go. Eyes that still twinkle with mischief and a resolute determination that says this is
not the end.
The man gives a sudden smile, and recognition flips a switch.
I think it might be me.

Liz Carlisle never imagined she’d be back in this place. Certainly never dreamed she’d actually enjoy the simple act of walking the dogs around the Nantucket neighborhood she’d grown up in.Yet here she was. Everything was different now. Renovations at Wyldewood, the rambling estate that Liz and her four siblings called home, were well underway. Her brother David and his wife Josslyn were overseeing the work on the house as well as running after their toddler twins, and her sister Lynette was still in Africa, so the task of trekking out with the family’s two labs had fallen to her. Truthfully, any excuse to get away from the noisy house, now more of a construction zone than anything, was most welcome. She studied the mottled branches above her as she waited for Diggory and Jasper to finish sniffing around the tree’s roots. The leaves were showing off in a dazzling display of golds and reds, a shock of color that would inspire any artist. Not so long ago, Dad would have found joy in capturing the beauty of the scene on paper. These days he showed little interest in art. He showed little interest in anything. Their father’s slow decline was just one more thing she had no control over. Liz sighed and breathed in the crisp air. Fall had taken its time this year, but today the salt-kissed island breeze held a chill that hinted of first fires and frosty mornings. Could she survive winter on Nantucket?

The cold she could handle. She’d grown up with it. But the dreary, dull days, nowhere to go, no city lights, no nightlife . . . well, maybe she wouldn’t miss that so much. She did miss her daily routine though. Rising at dawn to get in an hour at the gym before heading to work, being pulled along on the crowded sidewalks of the Financial District, the smell of smog and coffee and fresh bagels in the early morning air. The pinch of pride as she entered the shining glass building on Slate Street, riding the elevator up to the twenty-second floor to her corner office with a view of New York Harbor. Not that she’d ever really appreciated the view. Liz shoved her hands deep in the pockets of her red leather jacket and put those thoughts away. That life was behind her. Time to move on. She’d had little choice. “Come on, guys.” Liz urged the dogs forward and turned in time to see a black Jeep crest the top of the hill. Late afternoon sun filtered through the trees, and she squinted as the Jeep approached, weaving a little too dangerously for her liking. Her pulse picked up and set her on immediate alert. Somebody might have had a bit too much to drink this afternoon. Odd for an off-season Tuesday, but not unheard of. The vehicle jerked left, veered across the road and back again.

The door on the driver’s side opened with a slow creak. Liz stopped a few feet away and watched a pair of skinny legs clad in tight jeans and clunky black boots emerge. And then a young girl stood before her. A kid. Barely sixteen, if that. Great. Liz swallowed her first response and stepped closer. She gave the vehicle a cursory inspection and saw the airbag hadn’t released. No blood on the kid. No bruises that she could see. “Are you all right?” “Uh huh.” The girl was a wisp of a thing, big dark eyes rimmed in heavy makeup and shoulder-length jet-black hair framed an almost ghostly-white face. Liz stepped closer and put her game face on. “Have you been drinking? Drugs?” The girl’s eyes widened, her pale cheeks pinking. “What? No!” “Are you old enough to be driving?” Liz had to ask. “Do you have a license?” “What are you, a cop?” Defiance flashed “I’m a lawyer, and I can smell a lie a mile away. So think carefully and answer the question.” Liz knew what was coming. “I’ll take that as a no. Does this vehicle belong to you?” “Not exactly.” The teen twisted her neck from side to side, glanced at the front of the Jeep and then at the desecrated garden, turning back to Liz with a dramatic eye roll. “Well, that freakin’ cat should have stayed put.” Before Liz could reply, the front door of the house flew open and Evy McIntyre stood on the wraparound porch of her impressive three-story home. It was one of the larger houses in the area. Evy came from old money and owned an art gallery in town where she showed, and sold, many of Liz’s sister Lynette’s paintings. Lynette and Evy had formed an unlikely friendship over the last year, but Liz hadn’t seen much of the eccentric older woman since Lynnie left for Africa. 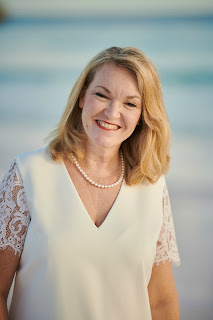 Catherine West is an award-winning author of contemporary women’s fiction. When she’s not at the computer working on her next story, you can find her taking her Border Collie for long walks or reading books by her favorite authors. She and her husband reside in Bermuda, and have two adult children and one beautiful granddaughter. Catherine is the winner of the 2015 Grace Award (Bridge of Faith) and the Romance Writers of America’s Faith, Hope & Love Reader’s Choice Award (The Things We Knew). Where Hope Begins released May 2018, and her latest novel, As the Light Fades, releases September 2019. 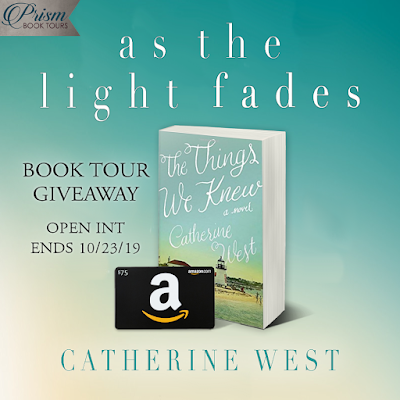 One winner will receive a $75 Amazon Gift Card and a copy of The Things We Knew by Catherine West (print to US/CAN, ebook to INT)
Ends October 23, 2019